Since Tenzing Norgay and Edmund Hillary first stood on the highest point on Earth, it is estimated that over 6000 successful summit attempts have been made. Over the past few years, the number of permits issued to climb Everest has gone up, and even this year, in a COVID ravaged season, a record 400 permits will be given out by the Nepalese government.

In amongst the hustle and bustle of base camp, filled with over 40 commercial climbing teams this year, are a pair of climbers hoping to make history. Catalan ultra runner, ski-mo champion, and general outdoor athlete, Kilian Jornet is no stranger to Everest. In 2018, he summited twice in a week without the use of supplemental oxygen, including a record breaking push from the Rongbuk Monastery to the summit and back again in under 26 hours which was described as near on running up the mountain and back. This year, along with renowned German Alpinist David Goettler, Jornet is back in the Himalaya and reported to be lining up a new objective. 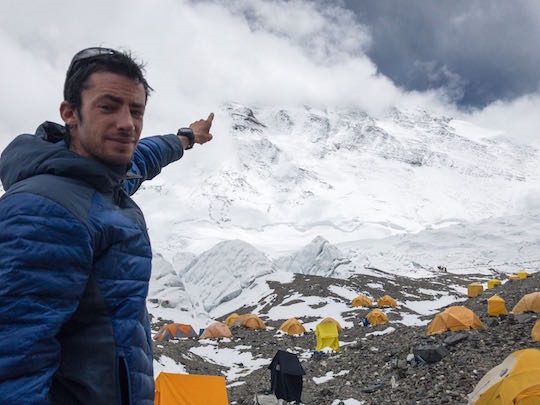 The Everest-Lhotse Traverse is said to be one of the remaining firsts in Himalayan climbing. A number of climbers, including those who have trained with us at The Altitude Centre, have previously summited Everest from the Nepalese side, returned to camp 3 or 4, and made a second push to Lhotse before returning to base camp, forming a Y shaped route. However, a true traverse is one which sees the climbers ascend and descend via different routes. It’s a feat which the late great Uli Steck attempted in 2013, before his untimely passing in 2017 while he was on Nuptse, preparing for the very same traverse. 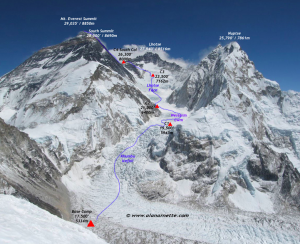 The Everest-Lhotse traverse planned by Uli Steck in 2013 and 2017 (from alanarnette.com)

The line takes the climbers from the Nepalese Base Camp through the Khumbu Icefall and to Camp 1. At this point, rather than progressing through the Western Cwm and up the Lhotse face to a series of progressively higher, established camps, the traverse will require the duo to veer west, and through the notorious Hornbein couloir; a route which has not been completed in its entirety since it was first climbed in 1963. From the summit, the line descends to the traditional camp 4 at 8000m, before continuing East to the Lhotse summit. At that point, the pair will have a decision to make. There’s much talk on internet message boards and blogs about the possibility of adding on a third peak, Nuptse, which would link the three together for the first time and complete the mythical Himalayan horseshoe. In reality, whether this is possible will depend on several factors, including the weather conditions, and the condition of the climbers once they reach the Lhotse summit. While the pair have yet to officially announce their plans, Uli Steck was adamant that ‘just’ reaching the Everest summit via the Hornbeim would be a huge achievement in itself, and anything beyond that was a bonus.

Only time will tell what unfolds, but perhaps Jornet’s own words on the matter best summarise what may lie ahead: