Pre-season. Two words that can strike fear into the heart of any athlete, but that can ultimately define a competitive season. It’s one of the only times that S&C coaches and sport scientists can have almost uninterrupted access to their athletes to improve fitness and build injury resilience to prepare them for the long in season. It could be the only opportunity to have a real focus on conditioning until an international window, so planning and executing a highly effective pre-season is amongst the most important things we can do to support our athletes.

all men are created equal, some work harder in pre-season – Emmett Smith (NFL all time running back)

While some conditioning activities can and should begin towards the end of the off-season, before pre-season even begins (you can read our previous blog on that here), the pre-season is where the really hard work takes place. Each pre-season plan will look different according to the individual player, but is likely to include elements of aerobic and anaerobic conditioning, and strength, power and hypertrophy work. With the demands of modern sport, the pre-season can often seem too short to achieve meaningful improvements in each of key performance indicator, and so any way of accelerating the rate of gain in conditioning should be jumped at. Here, we take a look at how altitude training can be implemented to achieve exactly that.

Aerobic fitness is undoubtedly one of the most important KPIs in team sports. Consider a footballer playing for 90 min + and covering 10-15km within that time, or a rugby player covering around 7km across 80 min and we can see that there is a huge aerobic requirement. 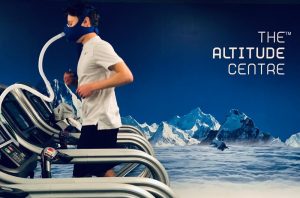 Aerobic training in hypoxia, whether steady state or interval, is an effective means of improving aerobic capacity in team sports players

Altitude training has long been used for the endurance sports to improve aerobic performance. The research has shown that endurance interval training twice per week for 6 weeks in hypoxia can improve performance markers like VO2max and lactate threshold to a greater extent than matched training at sea level. From a conditioning perspective, it’s particularly interesting that athletes training in hypoxia could achieve these results running at a slightly slower pace than their counterparts training at sea level, due to the increased internal workload from hypoxia. In practice, this can help manage training load effectively through a busy pre-season. From a practical point of view, hypoxic training can easily be implemented through treadmill running or through ‘off feet’ conditioning, for example via Wattbikes, depending on the stage of training and the individual athletes’ requirements. Monitoring both internal and external workload is important through these sessions, to ensure the correct stimulus is attained for the goals of the session itself.

While aerobic training and hypoxia is a very obvious match, anaerobic training in hypoxia is perhaps the most exciting area of research and application of altitude training to evolve in the last 10 years or so. Time and again, research has shown that performing repeat sprint training in hypoxia (RSH) improves repeat sprint ability (RSA) to greater extent, and more quickly, that does training at sea level. Early research in the field indicated that RSH improved elite rugby players’ ability to perform maximal sprints with incomplete recovery, and specifically they performed more sprints before task failure, with less fatigue across sprints. More recently, research conducted by the Welsh Rugby Union in a pre-season camp indicated that just 4 RSH sessions in 2 weeks was sufficient to significantly improve peak and mean power output across repeat sprints. Achieving such impressive results in already highly trained athletes has very interesting implications for anaerobic type conditioning.

Especially interesting is the practical implementation of RSH. While some athletes have incorporated RSH with treadmill or overland running, the sheer volume of high speed running required for a session put significant strain on the posterior chain, which would only be exacerbated in a pre-season. Instead, executing RSH off feet on Wattbikes has been the method of choice for the majority of teams and individuals undertaking this method. An example session of a short warm up, followed by 3 sets of 8, 10 second flat out sprints with 20s recoveries, 2 min inter-set recoveries, has been effectively implemented on Wattbikes. All importantly, these methodologies have been shown to translate positively to overland running and match play, as well as improving skilled performance at match intensities.

Not yet widely implemented, but the subject of interesting research, resistance training in hypoxia can be a useful technique to help athletes manage training load and get that little bit more from light to moderate load resistance training. The research demonstrates that lifting weights as light as 20% 1RM at altitude can improve both muscle strength and size, meaning that during an intense pre-season it may be possible to reduce the absolute load an athlete works at whilst improving fitness. The exact application of RTH will vary depending on the goals for each athlete and their stage of training, but research has shown its benefit at a range of intensity and rep ranges, demonstrating its versatility and potential use in a pre-season. 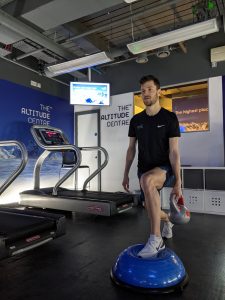 Putting It All Together

Through our experience in working alongside some of the highest profile athletes in the world, we have seen hypoxic training implemented very effectively through pre-season. While many Premier League clubs have their own altitude chambers within which to conduct hypoxic training, short term altitude training camps have grown in popularity in recent years. For example, the British Lions and Welsh Rugby have realised the benefits of altitude training by incorporating a simulated altitude training camp using hypoxic generators as part of their pre-competition prep. You can read more about that here, but Lions sport scientist Bobby Stridgeon has found that the intensified training that athletes complete at altitude is the best preparation when it comes to raising their fitness and competitive standards ahead of test match rugby. He says:

“We’ve used this in Wales extensively with the boys even when we’re playing at sea level and we’ve had some good results both anecdotally and with fitness testing as well. So the boys feel it’s good for them, but also when we’ve fitness tested the boys we’ve found that their fitness test improved compared to someone who hasn’t done any altitude training.”

Naturally, others have taken note and started to incorporate altitude specific blocks within their pre-season, to help intensify training and raise fitness levels ahead of the long in season. With a number of Premier League clubs now hosting their own hypoxic chambers at their training grounds, implementing altitude training is as simple as transferring conditioning sessions into the chamber. For those without, rented portable hypoxic generators have proven extremely popular and just as effective, with players using the generators to take their training to the next level to meet and even exceed fitness goals for pre-season in a short space of time.

For further information regarding altitude training camps or hypoxic generator rentals, please get in touch with the team below.

James
Previous Post
The Off Season: Rest, recover, and retain fitness with a little help from hypoxia
Next Post
Altitude Training In Functional Fitness Training