Altitude Training Adaptations: It isn’t all about the blood

When athletes head to high altitude for a period of training, there is generally one thing on their mind: increasing their red blood cell count. The theory goes that the low oxygen environment at altitude (or in an altitude tent), stimulates the body to produce a hormone called EPO which, as endurance athletes will know, in turn stimulates the production of red blood cells. For anyone looking to improve VO2max (and that’s most sportspeople across the globe), increasing the number of red blood cells circulating in the body is a good thing because oxygen is carried from our lungs to exercising muscle and the brain on haemoglobin, a small protein found on red blood cells. More red blood cells = more haemoglobin. More haemoglobin = more oxygen carrying capacity. More oxygen carrying capacity = higher VO2max.

We call this the haematological response to altitude (haematological being the medical term for blood based), and there’s a strong relationship between the amount of haemoglobin someone has in their body, and their VO2max. The figure below shows that clearly. At one end of the spectrum are dialysis patients with limited haemoglobin and subsequently low VO2max, whereas at the other end elite endurance athletes have both the greatest haemoglobin mass and VO2max.

Interestingly, however, while altitude training consistently improves athletic performance, not all studies, and indeed not all athletes in the real world, report increasing their red blood cell count or their VO2max after a stint of altitude training. This shows us two things. Firstly, that VO2max is not the only determinant of performance and that other factors must be at play. Secondly, altitude exposure is tapping into and improving these other aspects of our physiology in order to bring about these performance improvements.

The classic model of endurance performance cites three key determinants. First is VO2max, which as discussed is the maximal amount of oxygen you can get into the body and use. Generally speaking, athletes who can get more oxygen to their muscle and brain will perform at a higher level. Another factor is exercise efficiency, that is to say how hard does your body have to work to run at a certain speed or cycle at a given power output. The more efficient you are, the easier it is for your body to operate at relatively higher intensities. Finally, you have the lactate threshold, or the intensity (speed or power) at which your body begins to work above a sustainable intensity. Again, the higher your lactate threshold, the easier higher intensities are to sustain.

It seems likely, therefore, that altitude training can improve performance through any of these three determinants. VO2max can be improved via increased red blood cell count, but what of exercise efficiency and lactate threshold?

Studies consistently show between a 3-10% improvement in exercise efficiency after having trained at altitude. This means that athletes use between 3-10% less oxygen to perform at the same intensity after a block of training, than before the block. This is a good thing, as it means that they are exercising at a lower percentage of their VO2max, and it is physiologically easier for them to work at that intensity. There are a number of physiological mechanisms which have been suggested to explain this phenomenon, but it seems most likely that altitude training can improve the efficiency with which energy is produced in mitochondria within the muscle cells.

During exercise, the muscles are constantly producing lactate, which is used as a fuel for cellular processes within the muscle in which it is produced. For every lactate molecule produced, a hydrogen ion is produced too. As exercise intensity increases, there comes a point at which the body is producing lactate more quickly than it is used, and hydrogen more quickly than it can be cleared, and the concentration of both start to rise in the blood. The intensity at which this accumulation occurs is known as the lactate threshold. Above this point, the accumulation of hydrogen ions starts to impair performance, which makes it an important determinant of performance.

Hydrogen ions are handled by proteins called MCTs, which move them within and between cells to prevent accumulation.  Altitude training has been shown to increase the number of MCT proteins on and in our muscle cells, meaning that we can handle more hydrogen ion production before it builds up and impairs performance. In terms of our performance parameters, this increases lactate threshold.

Accepting that hydrogen ions will eventually enter the bloodstream, the body can also deal with them by having a substance ready and waiting to neutralise it when it is produced. In humans this is sodium bicarbonate, which binds to hydrogen ions essentially removing them from the bloodstream. We call this process ‘buffering.’ Exposure to altitude quickly increases the body’s store of sodium bicarbonate, meaning that altitude training has consistently been shown to improve buffering capacity. Interestingly research has shown that the improvement in buffering capacity correlates very well with the improvement in performance after altitude training, suggesting that this could be a major player in improving performance with altitude training. 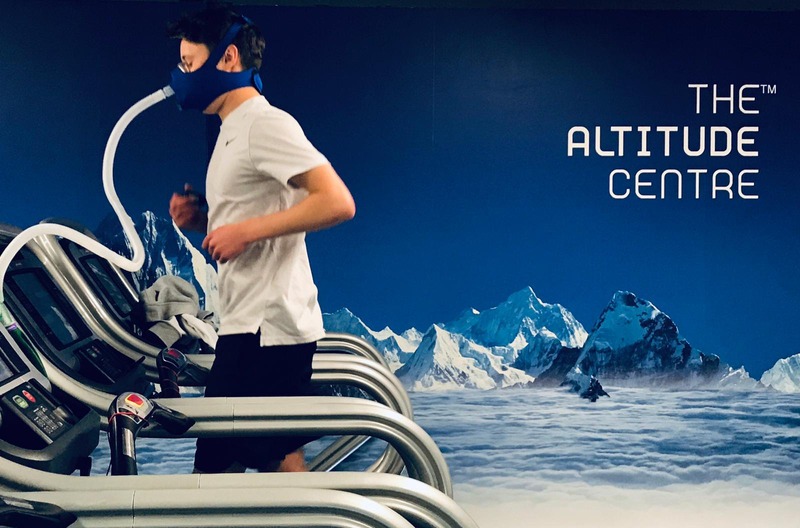 Sometimes, applying the findings of research can be tricky. The good news is that getting these physiological adaptations is very simple. For the blood based adaptations (that increase in red blood cell count and oxygen carrying capacity), gone are the days where only weeks in the mountains would suffice. We have seen athletes improve their haemoglobin mass very quickly with 3-4 weeks of sleeping in an altitude tent, which simulates being at high altitude so you are literally training while you sleep! The other adaptations are likely to be brought about by sleeping at altitude too, but for those who prefer not to sleep in a tent there is evidence to show that exercising at altitude, for example in our London chamber or with an at home kit, can elicit these adaptations. Ultimately, the results speak for themselves. Our most recent training camp, in which regular athletes just like you trained at our London centre twice weekly for 6 weeks, saw participants improve their functional threshold power by 10% on average. Regardless of the physiological underpinnings, such results are hard to ignore, whatever level of performance you are currently at, and whatever the goals you are working towards.

For further information about how you can incorporate altitude into your training, get in touch with the team below. You may also want to keep an eye out for our upcoming altitude training camp, a 6 week training block to help you reap the benefits of altitude.