In 2013 friend of The Altitude Centre, Olivier Girard, along with a number of other leading academics in the field, published a consensus statement in the British Journal of Sports Medicine titled: Position statement—altitude training for improving team-sport players’ performance: current knowledge and unresolved issues. The goal of the article was to summarise what little was known about altitude training for team sports athletes, and outline what the scientific community needed to find out to advance our understanding.

At the time, altitude training in team sports was on a precipice. The first study investigating repeat sprint training in hypoxia (RSH) was just about to be published, and that would prove to be a real game changer. It showed that by performing repeat sprint training (short sprints of 6-10s with incomplete recoveries lasting 20-24s) at ~3000m simulated altitude, the number of sprints that could be completed before reaching fatigue increased by 44%, compared to no improvement after training at sea level. In the years since, altitude training has gone from a training method on the fringes of team sports, to being used by the majority of Premier League football clubs, Six Nations Champions, and for the past few tours, The British & Irish Lions. So what has lead to this explosion in popularity in the past decade?

Well, like all things elite sport, it’s about results. Since that first study, the scientific literature has exploded with studies showing the benefits of repeat sprint training in hypoxia. Firstly the benefits to fitness on the Wattbike were proven, then researchers showed that improved repeat sprint ability on the bike translates to improved repeat sprint performance when running. Then other researchers looked at whether repeat sprint training on the treadmill was a feasible method for improving performance (spoiler alert, it was). The scientific community had shown the effectiveness of RSH for team sport performance. 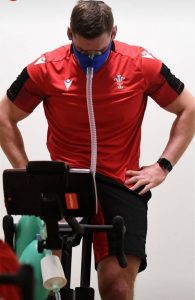 In the meantime, applied practitioners had been keeping a close eye on the developments the researchers were making. Amongst the most active in implementing RSH were the Welsh Rugby Union.

Before each major tournament like the 6 Nations, international teams are given only a short window to bring their players up to speed for international rugby. Every session, therefore, counts. Knowing this, Head of Performance Bobby Stridgeon began implementing RSH on the Wattbikes via portable hypoxic generators to massively increase the intensity of training in those precious few weeks. Interestingly, the team trialled RSH on a treadmill, however the sheer intensity and demand of high speed running was too great. Knowing the benefits of Wattbike training would translate to on pitch performance, they chose to stick with the tried and tested method of 3 sets of 8x 10s flat out sprint, 20s recovery on the bikes.

Speaking on a podcast recently, Stridgeon said “some of the guys in the 6 Nations were pulling the masks off thinking they were choking, they were drowning.” But the pain of the session is worth it for the results it can bring. Data published by the team showed that carrying out RSH just twice a week for 2 weeks in camp before their first match improved both peak and mean power across repeated sprints by up to 10% on average. In already very well trained, elite level athletes, these are astonishing improvements in a short space of time. On the pitch, Wales recorded their highest number of successful second half tackles in this years 6 Nations, showing how this type of training can help elite athletes resist fatigue and perform well deep into international competition. We wouldn’t like to say that RSH training using The Altitude Centre’s own portable hypoxic generators was they only reason for Wales’ triumphant 6 Nations campaign, but with stats like that it’s fair to say it will have contributed.

The combination of the research base and real world results has perhaps been one of the most influential factors in Stridgeon’s decision to implement altitude training with The British and Irish Lions ahead of their tour to South Africa this summer. The squad will start their altitude training during their two week UK camp, and take the equipment with them to South Africa to keep on top of their RSH training as well as their acclimation to high altitude before the tests in Johannesburg in July and August.

Perhaps mindful of the English performance in South Africa on tour in 2018, where the altitude seemed to catch up with the visitors after the first 20 min, the Lions will be preparing to be at their very best in terms of their fitness and their acclimation to altitude before taking on the reigning world champions in what is being billed as a clash of the titans.