We know how important altitude training is for elite performance. Prior to the 2012 games, 98% of British endurance athletes had used altitude training, and renowned distance coach Joe Vigil is quoted as saying that since 1968, 95% of all Olympic and World Championship medals from the 800 through the Marathon were won by athletes who lived or trained at altitude. But going to altitude train is one thing. Executing altitude training effectively to get the very best from it, is another thing again. 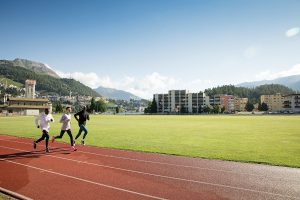 To get the greatest performance improvements from altitude training camps (e.g. heading to the likes of Font Romeau or Kenya for 3-6 weeks to live and train), research shows that athletes need to ensure three things. 1- Have enough iron. 2- Don’t get injured. 3- Don’t get ill. With these in place, performance should improve following an altitude training camp. Caveats 1 and 2 are simple enough to ensure. Supplement with iron if necessary, and track training volume (especially for runners). But how do we avoid illness? Especially when being at altitude for significant periods of time, coupled with higher training loads, has been linked to increased incidence of mild illness.

New research has shown that, like most aspects of life, it pays to be prepared. Researchers from Shanghai’s Research Institute of Sport Science investigated the effect of hypoxic preconditioning before an altitude camp, on the immune system during and after the camp.

They had nine elite level swimmers, who slept in altitude tents for 3 weeks before heading to terrestrial altitude in Kunming, 2200 m above sea level for a further 3 weeks to live and train. The 3 weeks sleeping in altitude tents was designed to precondition the swimmers to altitude, giving them a gradual introduction so that when they arrived in Kunming it wasn’t a (literal) shock to the system.

These results suggest an improvement in the complement regulation system and red blood cell immune function. Hypoxic preconditioning can therefore improve immunity and enhance the physical function of athletes during altitude training

The results showed that hypoxic preconditioning had beneficial effects on markers of the athletes’ immune function, including on white blood cells and specific markers called decay-accelerating factors which are involved in immune response to illness-causing pathogens. Red blood cell immune function improved too. The authors concluded that immunity was therefore improved, and it is likely that the physical function of athletes during the terrestrial altitude camp was improved, which may lead to greater performance improvements. 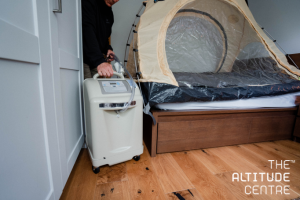 We’ve often had athletes train with us prior to terrestrial altitude camps, often to improve their acclimation status so that the first few days of training camp aren’t lost as the body tries to adjust to the suddenly thinner air. These athletes have typically used a combination of intermittent hypoxic exposure and exercise sessions to gradually introduce the body to hypoxic environments, allowing them to train more effectively when they arrive on camp. This new research indicates that sleeping at altitude prior to a camp could be a useful means of improving the response to altitude training camps by improving immune function. Therefore it might be recommended for athletes going to altitude to use a combination of sleep, exercise and passive exposures to altitude, to ensure the strongest possible physiological and training response to the altitude camp.

The Altitude Centre are in a unique position to provide technological and sport science solutions to athletes looking to implement altitude training at home, or at our City based site. Get in touch for further information on how we can support you in achieving your goals!