Any endurance athlete has experienced that moment in a sprint finish, or cresting the top of a brutal hill, when your lungs are burning and you just cannot get enough oxygen in to feed your hungry muscles. Chances are, a new review had detailed, that at that exact moment you were experiencing exercise induced hypoxemia.

Exercise induced hypoxemia (EIH) sounds like a scary medical term, but in reality it just means that the amount of oxygen in your blood drops because you are exercising. It is a result of what the authors describe as an ‘underpowered respiratory system’ which is strained beyond its capacity by intense exercise. In practical terms, EIH has been defined as a drop in the blood oxygen saturation of at least 4% between rest and exercise, with some athletes even at sea level recording spO2 readings of below 88% during intense exercise (for reference, ‘normal’ would be considered >95%). Interestingly, studies have shown that as many as 75% of athletes display the signs of EIH when exercising at sea level, and at altitude the prevalence is likely to be higher again due to the low atmospheric oxygen.

A sprint finish will leave your lungs burning, and reduce the amount of oxygen in your blood

It makes sense that having less oxygen in your blood will probably impact performance, and that’s what the research is starting to show. Indeed, anything greater than a drop of 4% in men and 3% in women reduces VO2max, a key determinant of endurance performance, with each additional 1% decrement in spO2 resulting in a 1% decrement in VO2max. While 1% may not sound like a lot, if spO2 drops into the high 80’s during a maximal effort, that means that when you need it most, your VO2max may be impaired by up to 6-7%. Again, while this is expected at altitude, what is surprising is just how common this might be at sea level.

The good news is that there is something we can do about it. Intermittent hypoxic exposure is a method of training we use here at The Altitude Centre. It involves breathing very high altitude (>4000m) air for 5 mins via a mask, with the aim of reducing spO2 to ~80-85%, alternated with 5 mins of normal room air to allow spO2 to recover, repeated through for 60 mins at a time. The goal of this type of training is gain the benefits of being at altitude without loading the musculoskeletal system, meaning it is perfect to top up a session in the chamber or as a standalone on rest and recovery days, or during a taper. Research has shown that training in this way can effectively reverse the signs of EIH, such that those who previously displayed EIH before training were classed as ‘non-EIH’ after 10 sessions in 10 days. This is matched by our own data and experience of preparing athletes and mountaineers using intermittent hypoxic exposure to help increase the transfer of oxygen from the air, into the lungs and then into the blood. 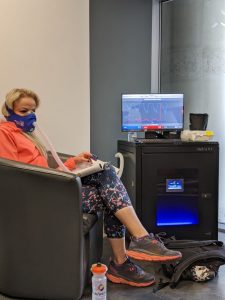 Because it is passive in nature, intermittent hypoxic exposure is simple to fit into a training plan. It does not tire you out or leave you feeling fatigued, and you can even catch up on social media, do your emails, or watch netflix while you’re ‘training’. What’s more research has shown it can help stimulate blood flow, and the release of useful hormones including growth hormone, which helps boost repair and recovery. Including it 2-3 times per week, or as frequently as possible, into your training plan, and even more so during a taper when training volume is lower, will help you get the most benefit from it.

To find out more about including intermittent hypoxic exposure in your training plan, get in touch with the team today!