The K2 Winter Ascent: What Were They Up Against?

On Saturday 16th January 2021, a group of 10 Nepalese climbers became the first to stand on top of K2, the second tallest mountain on Earth, in winter. It’s a feat never accomplished in 120 years of climbing on the mountain, and it’s being hailed as a success not only in climbing circles, but the Nepalese climbing community who have been hard hit by the effects of the coronavirus pandemic. Following news of the success, Lead Performance Specialist James took a look at the challenge that has been overcome.

Everest may well be the tallest mountain on Earth, but K2 is considered by many to be the hardest to scale. The death rate of 1 in 4 speaks to how deadly the mountain can be, and that only just over 300 people have summited, with this being the only successful attempt in winter, shows just how much of an achievement this is. Amongst the numerous challenges posed to the climbers, including extreme cold and technical climbing, was the severe lack of oxygen. How then, did hypoxia influence the climb, and how were two of the party able to summit without supplementary oxygen?

The higher you climb, the thinner the air becomes, leaving you with perilously little oxygen. Although the concentration of oxygen in the air at the top of K2 at 8600 m is the same as at sea level (20.9% oxygen is a constant up to 29,000 m) the air pressure drops drastically, from 760 mmHg to approximately 220 mmHg. This means that although 20.9% of the air is still oxygen, there is essentially ‘less’ air in the first place, meaning that for every breath the climbers were taking, they took in less than a third of the amount of oxygen as they would at sea level. At the summit, the effective oxygen concentration is just 7.2%. Given the relationship between temperature and air pressure, it is likely that the plummeting mercury at the summit of a winter expedition made the severity of hypoxia even greater. A quick calculation suggests that the bitter cold of around -62°C at the summit means the air pressure may have dropped as low as 150 mmHg for the summiteers, reducing the availability of oxygen even further. To exist in these conditions is difficult. To climb one of the most technically challenging peaks in the world, without supplementary oxygen, is extraordinary. 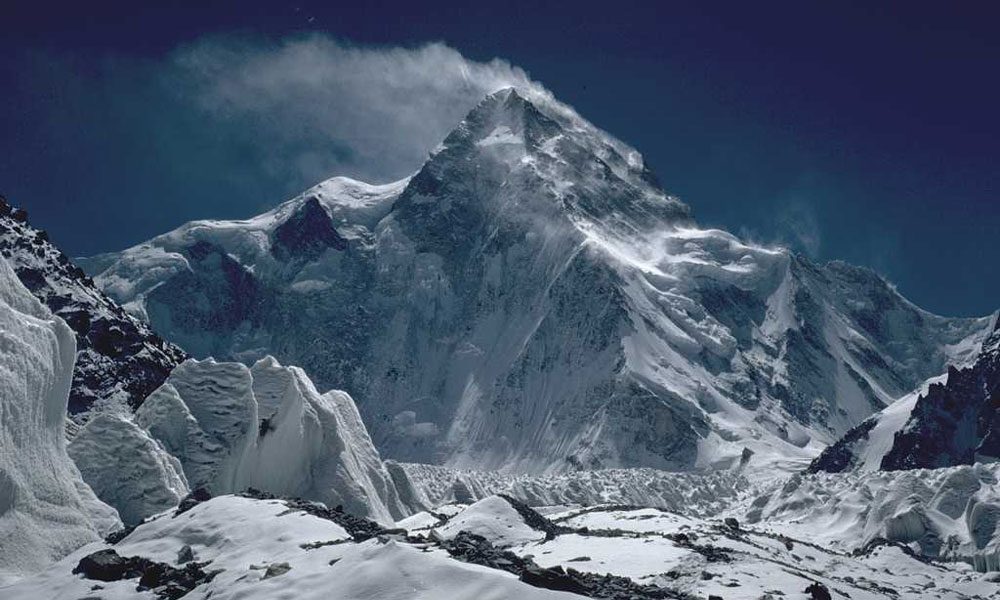 K2 stands at 8,600 m on the China-Pakistan border, in the Karakoram range

The effect of this reduced oxygen availability is well known by anyone who has ventured above ~3500 m. Less oxygen in the air means less oxygen moving into the body and a lower oxygen concentration in the blood, and ultimately less oxygen available to the working muscle and crucially the brain. At best, this hypoxemia makes physical work and decision making difficult, and at worst can lead to severe altitude sickness, and the onset of cerebral and/or pulmonary edema as the blood pressure in the brain or lungs rises dangerously high.

Nepalese climbers may be uniquely placed to deal with high altitude hypoxia. It is thought that evolution has gifted them with a genetic adaptation which means they produce ~240 times the normal amount of a substance called nitric oxide. While this by no means makes the climb easy, nitric oxide produced specifically in the lungs causes blood vessels to dilate. This has the dual effect of allowing more blood to pass through the lung, increasing oxygen uptake, and reducing blood pressure in the lung reducing the likelihood of developing pulmonary edema. Even with this small advantage, the effects of hypoxia were evident for the climbing party. Nims himself reported that he did not feel he’d had as much time acclimatising as he would have liked, having been forced to move quickly due to a destroyed camp and short weather window. That he and Mingma G were able to climb without supplementary oxygen in spite of this is remarkable. The fact the other 8 summiteers were using oxygen, and that some others Nepalese climbers had turned around before reaching Camp IV shows that even with a potential genetic advantage, success was far from a foregone conclusion.

(As a side note, not only were they climbing without supplementary oxygen, but doing so on their own ropes that they had fixed. In a post to his social media on 18th Jan, Nims discussed the fact that on other mountains some climbers claim ‘no o2’ summits, but have used ropes fixed by other parties, calling into question the purity of those claims.)

Research has shown that the response to altitude is in part genetically determined, but trainable. This means that for those of us without the Nepalese predisposition to altitude, such a summit attempt may be unthinkable without appropriate preparation. The key however, is that appropriate preparation is achievable, and not just through accumulation of weeks and months spent at base camp. With our hypoxic generators, it is possible to begin the pre-acclimation process in the months leading up to a high altitude expedition whilst still in the comfort of your own home. When Kilian Journet set the fastest known time to ascend Everest, he trained with simulated altitude for 3 months, combining sleeping in altitude tent with treadmill training at altitude on a daily basis. In total he was able to acrue ~350 hours at altitude including over 30 above 6000 m before leaving for the mountains. We have seen from our own data that preparing for the mountains in this way significantly improves the response to high altitude upon arrival in the mountains, and increases the chances of success on alpine peaks and Himalayan 8000’ers alike.

Throughout the entire acclimatisation period and the rotations up and down high camps, I have to say that I felt extremely well and slept perfectly… Kenton Cool and Tim Mosedale, another British mountaineer with several Everests and Ama Dablams in his CV commented that my adaptation to altitude was surely due to my hypoxic training prior to flying to Nepal. I believe they are correct.

The physiological challenges posed by the mountains cannot be understated, nor can their success in overcoming them. To find out more about how hypoxic training can help you achieve your objectives in the mountains, whether first timer or seasoned mountaineer, get in touch with the team.