The Off Season: Rest, recover, and retain fitness with a little help from hypoxia

At the end of a long, hard season, there is nothing that any athlete looks forward to more than a bit of time off. Call it the off season, call it a ‘transition phase’ if you like your periodisation terminology, or call it by what every athlete craves: time off! By the time the off season comes around, a football player could have been in season for around 10 months, with a hard pre-season before that meaning that they haven’t switched off for the best part of 11 months or a year. It’s no surprise that at that point players not only want some time without intense training, but physiologically require the rest to prevent overtraining, injury or even burnout. Then there’s the task of getting fit again for pre-season. It’s a tough cycle!

The off season is all about getting necessary rest before a return to the demands of pre-season and then the in season. Often it’s time for holiday, socialising, and generally enjoying life a little. However the off season has increasingly become an opportunity to work on particular weaknesses ahead of the all important pre-season.

The trick to a successful off-season is therefore balancing the necessary rest, with retaining sufficient fitness and identifying areas to work on ahead of pre-season. It’s a difficult balance to strike, but one that is possible to achieve, and even more so with the use of altitude training.

People often think of altitude training as being a tool which makes training harder: harder to run at the same speed, cycle at the same power output, or lift the same weight. To some extent, that’s the case and if you try to perform the exact same absolute intensity at altitude as sea level, your heart rate will be higher and exercise will be harder. But what if we flip our way of thinking and say that we only need to reach a certain heart rate to achieve the desired training effect, so what if by using altitude we can do so at a lower power output or running speed than we would at sea level.

The figure below is from friend of The Altitude Centre, Dr Olivier Girard, and it clearly demonstrates this. When running at sea level, a speed of 14kph is required to produce the required training stimulus, whereas at an altitude of 3000m, this drops to a speed of 10kph. If this hypothetical player can run 29% more slowly at altitude than sea level, but achieve the same fitness benefits, then there is an obvious knock on effect on their ability to rest and regenerate whilst maintaining fitness.

In this example, the player is able to run at a lower speed, inducing less fatigue. Moreover, by running at a lower speed they are also reducing their ground reaction forces, joint loading, and muscular strain to name a few, meaning they are able to maintain fitness with a far lower injury risk than they would be exposed to by running more quickly at sea level. In this way, altitude is not only helping players maintain fitness without working too hard and becoming fatigued, it can also help reduce the likelihood of overuse injuries during this phase of training.

Getting Fit Ahead of Pre-Season

In the modern era, the off season sees players gradually ramp their training up ahead of pre-season, to arrive back at the training ground already as fit as possible on the first day. In a world cup year, of all years, it’s vital that players hit the ground running in pre-season, ready to be in form right from the first kick off of the season.

This presents S&C coaches and sport scientists a unique scenario of taking players from off-season to match fit in as short a space of time as possible. Once again, a challenge which can be overcome with the assistance of altitude training through those final stages of the off season.

Repeat sprint ability is a key performance indicator in elite level team sports. The ability to sprint, having already sprinted and with little recovery, is known to differentiate athletes at different levels, and the player with the greater repeat sprint ability (RSA) is more likely to be more successful. We also know that repeat sprint training performed in hypoxia (RSH) is a highly potent way of improving RSA in elite athletes. 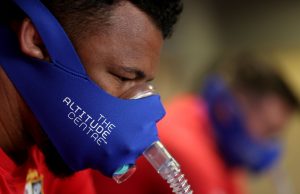 One study conducted with the Welsh Rugby Union showed that completing just 4 RSH sessions in two weeks significantly improved RSA in international rugby players. The players performed 4 sessions, which consisted of 3 sets of 8, 10 second sprints, with 20 second recoveries. Interestingly, players who did the same training but at sea level failed to improve their RSA in the same time frame. The fact that such significant improvements were possible in a short space of time in already very highly trained athletes, demonstrates the utility of RSH in getting high performing athletes fit, fast. It has subsequently been used across a range of sports to return players to high levels of fitness as quickly as possible, whether that be at the end of the off-season/start of pre-season, during international breaks, or prior to international training camps or competition.

Implementing altitude within an off-season

When it comes to integrating altitude training within the context of an off season, there are a number of options available to athletes. With time away from the club at a premium, many will choose to rent hypoxic generators for use at home, combining the generator with a Wattbike or treadmill to keep their conditioning in check and perform repeat sprint training without having to leave the house. Others will be able to use generators or chambers at the club, to top up the work done through the off season. In this way, altitude training is a solution which can be implemented very effectively and very easily within an off-season plan

For further information regarding altitude training during the off-season or to enquire about altitude generators get in touch below.