Intermittent hypoxic exposure (IHE) on the MetraFit POD is one of the best ways to pre-acclimate before heading to high altitude. We’ve seen it used successfully by climbers heading to altitude for the first time and the hundredth time alike, whether trekking to Everest Base Camp or climbing to the summit. For those that don’t know, the way IHE works means that you spend 5 minutes breathing high altitude air, and then 5 minutes sea level air, repeated for 1 hour. Across the course of training, the altitude we simulate increases gradually until we reach ~6500m, the highest level to which the human body can acclimate.

Even with the success of this protocol in preparing climbers for high altitude climbs, one question we are often asked is ‘why is it intermittent?’ On the face of it, it’s a very reasonable question: why alternate 5 min at altitude and 5 min at sea level, and ultimately spend only half of a 1 hour session actually at altitude, when you could just sit there breathing high altitude the whole time? New research sheds a light on exactly what’s going on during that 5 minutes at altitude, and why accumulating your time in hypoxia like this is best when it comes to acclimation. 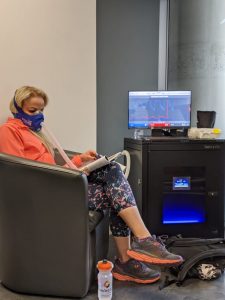 IHE on the MetraFit POD is a 1 hour session in which high altitude air is breathed for 5 mins, interspersed with 5 min at sea level.

Researchers from Griffith University on the Gold Coast, Australia, were keen to compare IHE, with more continuous style exposures in relation to outcomes for acclimation. They asked 10 healthy and reasonably fit participants to train for 1 week with IHE, and, much later on, 1 week with Continuous Hypoxic Exposure (CHE). Both IHE and CHE sessions lasted ~70 mins, and were designed so that the blood oxygen saturation (spO2) averaged 85% for every session in each condition. The only difference between each week of training was whether that average spO2 was achieved by several intermittent exposures lasting up to 5 min, or via one continuous exposure for the duration of the session. Before and after each block of training, the researchers looked at a host of measures which indicate each participants’ individual level of acclimation.

To cut to the chase, the results demonstrated that those measures of acclimation status improved more so (or only) after IHE versus CHE. Specifically, red blood cell count, haemoglobin mass, and the erythropoietic stimulation index all changed favourably only after IHE, whereas no change occurred after CHE. In sum, these results suggest that after IHE, the participants were better equipped to transport oxygen around the body, to meet the demand from working muscle and from the brain.

The reasons behind this finding are the scope of future research, but the authors had some thoughts on why this might have happened. Firstly, they cited previous research that noted the total hypoxic dose required to stimulate altitude induced gene activation is 12%hrs (you don’t need to worry about the units so much, just the fact it required 12!). In this current research, the authors demonstrated that both IHE and CHE achieved a dose of 18%hrs; 50% more than the minimum required for this stimulation, showing that even an intermittent exposure can accumulate sufficient hypoxic dose to achieve meaningful physiological adaptation.

However, that wouldn’t account for the differences between IHE and CHE as both had the same hypoxic dose. For this, the authors suggested that it was the intermittent nature of the exposure itself which was key. You see, to achieve a session average of 85% spO2 during CHE is very simple – set the altitude to elicit an spO2 of 85% for the duration. However, to achieve a session average of 85% with intermittent application means there will be short periods of time where spO2 is well below 85%, and short periods of time where it is above 85%. Here lies a potential key to the success of IHE. The authors suggest that there may be some threshold spO2 exists, below which the underlying mechanisms for adaptation are triggered, and only by completing IHE do we actually get below that threshold. Furthermore, by doing IHE rather than simply doing CHE at a lower spO2, we see repeated exposure to a stressor which may ‘toggle’ our response on and off every time we are exposed. In other words, being exposed to multiple, short blocks of altitude may trigger the response at the start of each block meaning it is triggered multiple times per session, whereas one continuous block would only trigger the response once.

To make IHE as specific as possible, we can begin incorporating trek-specific activity into the session, like hiking with a weighted pack, or performing step ups at high altitude

The key therefore is that by performing IHE, we can have repeated exposures to much lower spO2 than we could with CHE, triggering the adaptations that we need for pre-acclimation and ultimately for summit success! At The Altitude Centre, we can even take this one step further. Whereas traditional IHE is passive (i.e. the altitude is administered while you’re sitting relaxing, and catching up on Netflix at home or on site here in London), our portable hypoxic generators mean we can conduct controlled IHE style sessions while undertaking trek-specific activity. Picture getting the walking boots and day pack on, and hiking on a treadmill or getting your step ups in, all at altitudes of up to 6500m. For us, it’s the perfect and by far the most specific preparation for a high altitude expedition, and the cherry on the training cake for anyone headed to high altitude.

With climbing season truly upon us, you can get in touch below o find out more about IHE and preparation for the mountains!