The Demands of a New, Unique Winter Olympic Sport

Depending on your perspective, skimo sounds like it could be some sort of condition of the skin, a novel cryptocurrency, or perhaps some kind of musical instrument for children. For those in the know, skimo refers to the once niche sport of ski-mountaineering, the latest addition to the ever-growing list of winter Olympic sports.

Ski-Mountaineering is, as the name suggests, a sport which combines cross country ski-ing and mountaineering. Athletes fight to be the fastest to climb a mountain and descend on skis, across a range of disciplines, distances and levels of technical difficulty. At the 2026 Winter Olympics, we’ll be treated to a mixed relay, mens and womens sprints (a race lasting ~3 mins in which athletes race up and down a small hill gaining ~300ft elevation) and the mens and womens individual races (which lasts 2hrs and involves literally climbing up mountains and ski-ing back down again, as quickly as possible).

Let there be no doubt about it, the most proficient skimo athletes have serious aerobic engines. These are amongst the fittest endurance athletes on the planet. It’s what we’d expect from such a demanding event, especially at Olympic level, and their physiology may not be that different from other endurance sports like XC ski-ing. What is unique about skimo is the height at which competition takes place.

Whereas most Winter Olympic sports are capped at ~1800m above sea level, there is no limit on the altitude at which a skimo race takes place. After all, if the race is to the top of a mountain and back down, there will inherently be a level of altitude involved. Some events might top out at around the 4000m mark, meaning these fall squarely in the realm of high altitude events, bringing with it a host of challenges not previously seen at the Winter Olympics.

The Challenge of Altitude

At altitude, performance in these sorts of sports is impaired. On paper, endurance performance is remarkably simple – you take oxygen from the air around you and use it to burn fuel in the muscles to produce force, which makes you move. The more oxygen you can get from the air and use, the more force, and the faster you move. At altitude, there is simply less oxygen available for your muscles to use, and performance is impaired. In elite athletes, altitudes as low as 600m might start to impair performance, and for every 1000m or so thereafter, VO2max declines, on average, a further 6%. This means that trying to move at the same speed becomes exponentially harder the higher you climb.

Not only is there the physical impact of altitude but the potential mental and cognitive impact. When assessing the performance of high altitude climbers, we regularly see impairments in both speed and accuracy of cognitive tasks performed at altitude. For athletes trying to make the right decision in a hurry (and while descending rapidly on skis no less!) this is potentially an issue for their oxygen starved brains.

So What To Do About It?

These athletes are all used to operating at speed in the mountains. However, with this being the first time that skimo is joining the Olympic program, the stakes are higher than ever, which means the athletes will be looking to squeeze every last drop of preparation out before the race schedule commences. A large part of overcoming the stressor of high altitude is spending time at altitude. The more time accumulated at altitude prior to race day, the better the body will be able to cope with climbing. 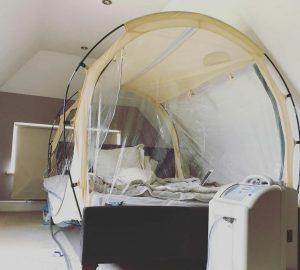 Many athletes will choose to sleep in altitude tents. This has long been considered the gold standard of altitude training from an endurance fitness point of view, but the same adaptations which help improve performance will also help counter the negative impacts of altitude. For anyone heading to high altitude, we would consider intermittent hypoxic exposure a must. This style of training, which involves just sitting back and relaxing while you breath hypoxic air from a generator, is the best way to pre-acclimatise for altitudes up to 6000m. We’ve used this extensively for climbers heading to popular peaks like Kilimanjaro or making the trek to Everest Base Camp (you can check out Teona’s blog on pre-acclimatisation here), and although skimo athletes won’t be heading quite that high, the better prepared the body can be, the better, especially because the athletes will gain altitude very quickly, giving their bodies no time to adjust or adapt during the race itself.

Given its recent addition to the Olympic program, there has been less research on skimo than most other Winter Olympic sports. Authors of a recent review on the current state of knowledge cite that there is still much to learn about best preparation for competition at such high standards. However, the principles that we have applied so consistently (and successfully!) to mountaineers heading to all altitudes over the years seem to me like a good place to start.